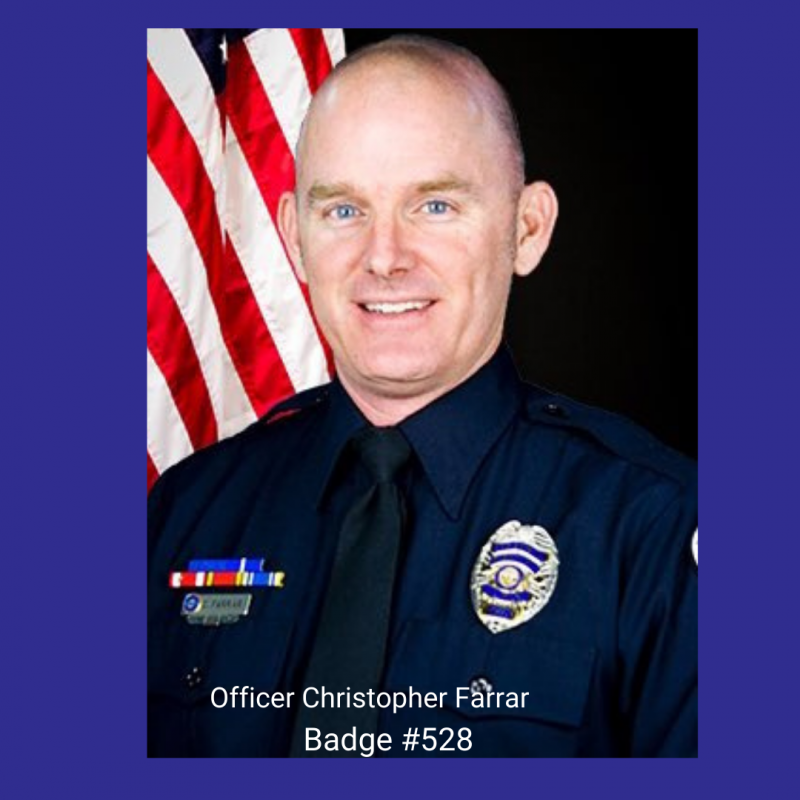 People throughout Chandler and surrounding communities have expressed their grief and support for slain Officer Christopher Farrar and the Chandler Police Department.  Many are looking for ways to help the family.  Below is a list of events and opportunities to show your support.

100 Club: The 100 Club's mission is to support public safety. Donate anytime at:  www.100club.org/fallen

Tuesday, May 4
Mickelson Golf Properties, will be donating 100% of all greens fee revenue from Ocotillo Golf Club in Chandler, McDowell Mountain Golf Club in Scottsdale and Palm Valley Golf Club in Goodyear.
Visit:  @ocotillogolf on Facebook

Thursday, May 6
Zzeeks Pizza & Wings (McQueen & Warner): 20% of all sales donated to the family including online, delivery, carry-out and dining
Use Code: ZZEEKS20 for online ordering

Chandler Police Officer Christopher Farrar was killed in the line of duty by a suspect driving a stolen vehicle on Thursday, April 29th, 2021. He was assisting in a multi-agency police incident involving a violent felon suspect.

Christopher was an 18-year veteran of the Chandler Police Department. He held multiple positions throughout the department during his career, including the patrol division, the bicycle team, and his current position as a K-9 Officer.

Christopher received numerous commendations and accolades from community members, business owners, co-workers, and supervisors during his career. He was a recipient of the Medal of Honor in 2004, the Community Service Award in 2009, the Spotlight Award in 2019, and a four-time recipient of the Lifesaving Award.

Christopher is survived by his mother and father, brother, sister, daughter, two sons, and grandchild. He was a son, brother, father, uncle, grandfather, and dedicated Police Officer.