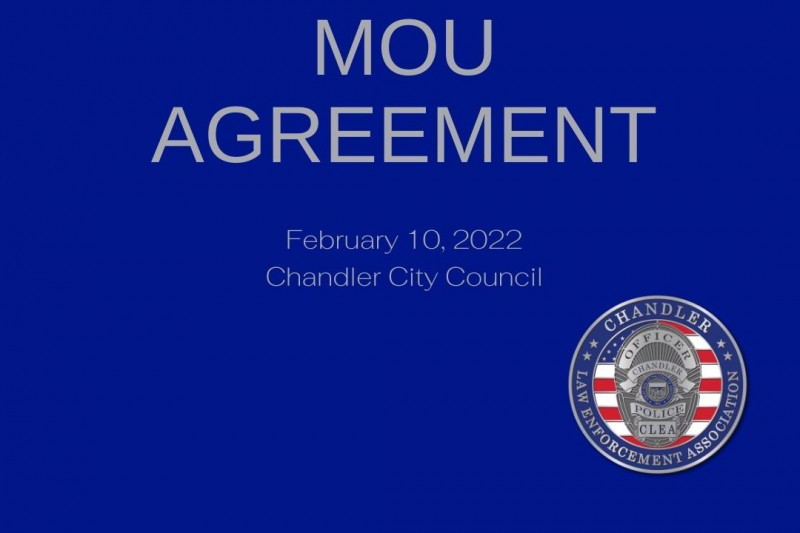 Chandler, AZ (Feb. 11, 2022)--The Chandler Law Enforcement Association (CLEA) has reached an agreement with the City of Chandler that will help retain current police officers and attract new hires for the next contract period. With nearly 80 officers eligible for retirement today, and staffing shortages compounded by a competitive market for new recruits, this Memorandum of Understanding (MOU) supports Chandler police officers and public safety in the city.

"We appreciate that the City Council recognizes the difficulties of policing for our current officers, and how competitive the market is for new recruits," said Michael Collins, CLEA President. "Our officers have worked incredibly hard for a very long time, and I'm glad we are able to find ways to reward them for the excellent job they have done to keep the community safe."

CLEA, a bargaining unit for police officers, advocated for increased benefits and staffing to alleviate the unprecedented challenges facing the department over the last year. CLEA most recently presented a plan to hire 83 police officers over the next five years to increase staffing for the department, which hasn't added any new positions since 2008. In that same timeframe, the city has grown by more than 50,000 residents.

In June, Chandler City Council took the first step by authorizing 25 new positions, with a commitment to authorize a total of 67 positions over the next five years (46 of which are at the officer level).

The 2022-2024 MOU includes: a one-time retention bonus; a plan to move Chandler from its current position as the fourth highest paid agency to the third highest paid among comparable agencies, making Chandler more competitive in its ability to recruit and retain employees; pay for several previously excluded specialty assignments in order to interest people in difficult jobs and retain experienced employees; and ongoing merit increases. The MOU was accepted by CLEA members at their annual meeting on December 9. The two-year MOU was approved on by Council last night to be implemented in the next fiscal year beginning July 2022.

The process began in September with CLEA presenting its requests at a City Council Work session.

"We are advocating as much for our community as we are for our officers," said Collins. "We'll continue to work with the city to find ways to support the work the police department does for our residents."